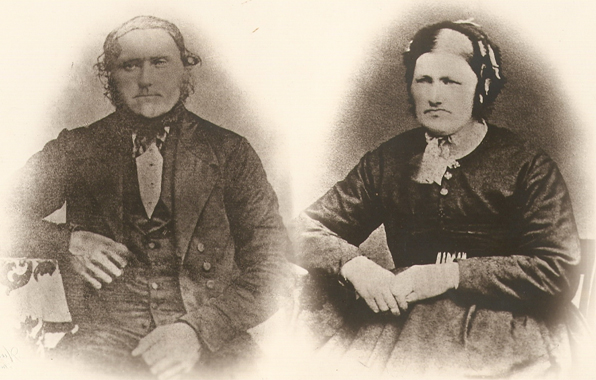 We who have made this web page are working with a family history book where we are starting with our great great grandparents, Dorothea Michaeline Angell (1812-1896) and John Jacobsen (1808-1860). They married 16.october 1831 and got 7 children. With this page we are trying to reach all their descendents wherever they might be. If you are one of these, please contact us. When writing this we don’t know how many of their descendents that will be a part of this book, probably between 1300 and 1500, but our target is of cause everybody.
The book will also give an overview of their ancestors. This web page will give just a small taste of what you will find in the book.
Dorothea and John both belonged to the well-known Norwegian Benkestok Family. The first person we know in this family lived about the year 1300. Torleiv Trondsen Benkestok (1460 – 1504) also belonged to the Smør family through his mother, Berguit Torleivsdatter. Jon Smørbalte is the first known person in the Smør family. He lived about the year 1000. Son of Torleiv, Trond, was married to Anna Jonsdatter Haar, among others she belonged to old Norwegian families as Rein, Giske, Bjarkøy and Sudreim.

We, Einride Koteng and Halvor Koteng started this job in 2006. Our goal was to update the family history book our uncle, Guttorm Koteng made in the 1980ès. He started with our great grandparents Sofie and Johan Andersen, and followed their descendants to 1981. He also wrote a summary of the family history all the way back to Tord Benkestok who lived between 1350 and 1450. The job our uncle Guttorm did, made the interest of genealogy growing in our family.
After beating a little around the bush, we started in February 2007. Our first goal was to find Sofie and Johan’s descendants born after 1981. Now we are finished, and have decided to distend the project. Next goal is to find all descendants of great grandmother Sofia’s parents, Dorothea Michaeline Angell and John Jacobsen.

We have been using the “Slekten Ellingsen” by Charles Ellingsen. He started with Elling Christophersen who lived from 1676 to 1730 as the progenitor for this part of the family who are known as “The Ellingsen Family”. Charles Ellingsen registered about eleven thousand five hundred people and finished his book in 1963. About six hundred of these are descendants of Dorothea Michaeline Angell and John Jacobsen. Read more about Elling Chrisopersen here

We also have been using Wilhelmine Brandt’s book about the Benkestok Family. As both Dorothea and John belong to this Family, this will be the starting point for our book.
READ MORE ABOUT THE BENKESTOK FAMILY HERE

Many other old families are married in to Benkestok Family. Among those are the families Angell, Blix, Storch, Norum and Soop. In these families there were many priests, lawmen, traders and landowners. That makes it easier to find information.
READ MORE ABOUT ANGELL, BLIX, STORCH, NORUM AND SOOP HERE.

You will also learn about the old Norwegian Families at Bjarkøy, Giske, Rein, Sudreim and many more, and show how they are related to the old Norwegian, Swedish and Danish kings.
READ MORE ABOUT THE BJARKOY FAMILY HERE.

Seven children of Dorothea and John got their own children:
Christine Eline Paasche, (b.1833), was married to Andreas Michael Pedersen (b.1828). In 1881-82 they emigrated to Minnesota with their 8 children. They have a lot of descendants in the USA.
READ MORE ABOUT CHRISTINE ELINE AND ANDREAS HERE

Jacobia Ovedia, (1836-1913) was married to Amund Johnsen (1830-69), and had 5 children. Amund drowned on his way for the yearly fisheries in Lofoten, just 39 years old.
READ MORE ABOUT JACOBIA OVEDIA AND AMUND HERE

Elling Ola Jensenius Dahl, (1841-78) was first married to Karen Anna Larsdatter (1843-73). They had 4 children. Two of them died as babies and the two girls that grew up both went to America. Karen Anna died just 30 years old and Elling remarried to his second cousin Anne Elisabeth Hvid Tostrup (1837-1909) in 1875. They also had two children; one of them went to America.
READ MORE ABOUT ELLING OLAI AND HIS DESCENDANTS HERE

Sofie Holberg, (1844-1928) married Johan Jacob Andersen (1837-1917), and had 9 children. They first lived at Torsvik in Meløy, but in 1884 they soled the farm and decided to go to the USA. As they were travelling around saying farewell to relatives and friends, they found a nice farm for sale in Lurøy. They sold the America-ticket, bought the farm, and today they have some hundred descendants in Norway. There is also some in Sweden, Denmark and USA.
READ MORE ABOUT SOFIE HOLBERG AND JOHAN JACOB HERE

THE FAMILY HISTORY BOOK
To day it is much easier working with genealogy then just a decade ago. Accession to sources is enormous compared to the time Charles Ellingsen and Guttorm Koteng made their books.
We are now planning a book about Dorothea Michaeline Angell and John Jacobsen, their descendants and their ancestors.
We want to make a book of high quality, containing as much relevant information as possible.
It could be a written “biography” or an interesting anecdote. To this we need you help. Write a little about yourself and the nearest family. Send pictures of yourself and your family all the way back to Dorothea and John. What you don’t think is interesting today will be family history for your grandchildren.
READ MORE ABOUT THE FAMILY HISTORY BOOK HERE.

What do you know about your ancestors?
We don’t want the contents of the book just to be names and numbers. Fore some of our ancestors it is possible to find interesting facts. Here is a selection:

– One of our forefathers cut his priest with a knife and called him a “gangster priest” and a “priest of adultery”.
READ MORE ABOUT OLE STORCH HERE

– In the old church of Lurøy there is a three hundred year old chandelier with inscription given by our forefather Arnt Olsen Storch and his wife Johanne Mogensdatter.
READ MORE ABOUT ARNT AND JOHANNE STORCH HERE.

– In the church of Bodin there is a portrait of Hans Lauritsen Blix (1596-1666) and his wife Ingeborg Svendsdatter (1603-87). He was the dean in the region of Salten until his death in 1666, and one of our forefathers. He was quite an active man both on land and sea.
READ MORE ABOUT HANS LAURITSEN BLIX HERE

– The fames Norwegian priest and poet Petter Dass wrote a wedding poem to our ancestors Judith Volqvarts (1676-1746) and Rasmus Angell (1678-1744).
Not everybody is awar of that the original title of the poem ”Fiskervise” is ”Brudlops Digt til Rasmus Angel i Nordlandene”.
The painter Karl Erik Harr have been inspired to make a watercolor to this poem. We can see Mr.Petter at the rudder, Rasmus at the stem and Judith as a dancing Siren on the top of the waves.

– Michael Hvid was great great-grandfather to our great great-grandmother Dorothea and the “Stiftsskriver” in Nordland. The “Stiftsskriver” administrated the properties and controlled the economy of all the churches in a county.
In more than 40 years he also administrated “the Trømsø Property” the northern part of the “Irgens Property” owned by baron Jacob de Petersen from Amsterdam.
READ MORE ABOUT MICHAEL HVID HERE

Sources.
Our Main sources are Wilhelmine Brandt; Slægten Benkestok, Charles Ellingsen; Slekten Ellingsen, Thomas Norum; Slekten Norum and Slekten Blix, and various historical web pages, church books and censuses.
In the yearbook of Leroy we can find some stories about our ancestors. Rune Bang the editor for all the 18 yearbooks so fare, have given us the permission to use what ever we want from these books.
In the Family History Book you will find references to all our sources.