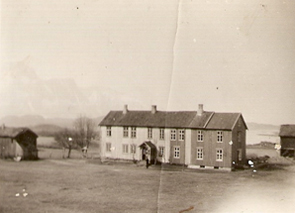 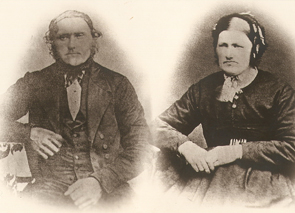 Dorothea was born in 1812 at Grønøya in Meløy as the daughter of the skipper and merchant Hans Christian Angell and Ingeborg Marie Hvid Angell that died in childbed in 1813, just 24 years old. Hans remarried in 1814 and Dorothea had many half sisters and -brothers.
Dorothea lived through three consensuses at Valla in Meløy, and the distribution of marital property after John died, gives us an insight in her life. As a 48-year-old widow in 1860 she had the responsibility for 7 children between 7 and 27. None of them were married when their father died, but just a few months later the priest had blessed three of them. The oldest son, Elling inherited the farm.
Dorthea had in many ways a hard life; her son Hans died New Years Eve 1861, just 14 years old. In January 1869, Amund, her son-in-law drowned on his way to Lofoten. In 1873 both her daughter, Ingeborg (32) and her daughter-in-law, Karen Anna (30) died. In 1878 her oldest son, Elling died, just 37 years old. In 1881 her son-in-law, Andreas emigrated to America with five of the children. A year later, Christine follows her husband with the rest of the family. But Dorothea also saw happier days; she had 39 grandchildren and 28 great grandchildren before she died at her daughter Bente`s farm, Landmark at the age of 84.

When John died Dorothea and the children inherited 5.883 Speciedaler; that’s the value of 600 cows. Reading the partition, gives a good impression of how a farmer and ”Jekte-skipper” lived in the middle of the nineteenth century. Dorothea and John own both a book cabinet, sofa, armchairs, curtains, porcelain, silver spoons, mirror and paintings, and in the ”Priests Room” there is a down comforter at the same value as a cow.
We can see that they are trading with the Pomores, this Russian people that were making business along the coast of Northern Norway for several hundred years until the revolution in 1917. The Pomores wanted dry fish and the Norwegians grain.
YOU’LL FIND THE COMPLETE PARTITION HERE