were great-great- grandparents to our great-great-grandmother Dorothea Angell. When they married the fames Norwegian priest and poet Petter Dass made them a wedding poetry, to day known as “Fiskervise” (The Fisherman’s Song), a well known song in Norway.

Rasmus (1678-1744) was born in Trondheim as son of the merchant Morten Mortensen Angell and Maren Christensdatter. Judith (1676-1746) was also born in Trondheim. She was daughter of notarius publicus Carsten Volqvartz and Kirsten Marcusdatter Angell.
Judith was married 17 years old to the merchant at Aakvika at the island Dønna, Benjamin Peitersen Dass, a brother of the priest and poet Petter Dass. Benjamin and Petter belonged to the Benkestok Family through their mother, Maren Petersdatter Falch.
Judith was Benjamin’s 3.wife, and he was 26 years older than her. When he died in 1702, Judith was just 26 years old and had four small children to take care of. For Petter Dass it was important to get a new husband to the widow, and a new merchant at Aakvika. Certainly he was pleased, because he made a wedding poetry to Judith and Rasmus. To day it is known as Fiskervise (The Fisherman’s Song), but the original name was ”Brudlops Digt til Rasmus Angell i Nordlandene” (Wedding Poem to Rasmus Angell in Nordland). We can see that Mr. Petter is having fun with the name Angell (Hook), and that he is pointing nose to those who came to late with their proposal. 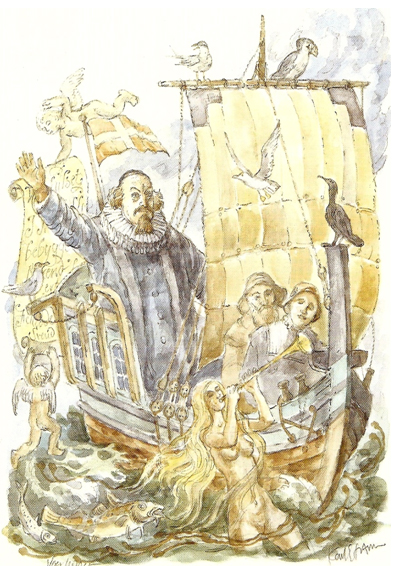 This is the 6 first verses out of 16. You will find the next 10 in the Family History Book.