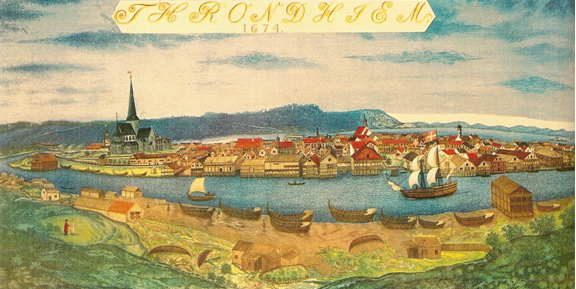 The first persons that settled in Norway was the two sons of Morten Pedersen and Anna Pedersdatter from Nordgård, Angeln in Holstein. Two of their sons came to Norway about 1650 and was both merchants in Trondheim.
The eldest was Morten Mortensen Angell (1624-1688). His son, Rasmus (1678-1744), was married to Judith Volqvartz, a widow, first time married at the age of seventeen to Benjamin Dass, a brother to the poet and priest Petter Dass. When Judith and Rasmus married, Petter wrote them a Wedding Poem. The poem is today known as ”Fiskervise” (The Fisherman’s song). They have a lot of descendants in Norway.
Lorentz (1626-1697) was two years younger than his brother. He was married three times and had 17 children, 13 sons and 4 daughters. Lorentz knew how to make money multiply, he owned a lot of farms and was the main owner at Røros Copper mines. He was one of the fifteen richest men in Norway. He has a lot of descendants.
READ THE WEDDING POEM TO JUDITH AND RASMUS HERE 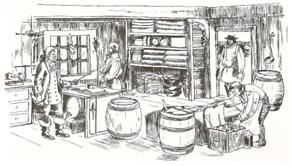 Arnt Olsen Storch (d.1715) is the first ”Trondhjemsborger” (a merchant from Tronheim) that starts trading at Selnes in Lurøy. His father was Ole Olsen Storch, merchant in Trondheim. We know for sure that he had started trading in this region in 1681; this year he is taking pledge in goods at Jon Lauritsen, Husøy. Storch had the best relations with other merchants, and made good money. A note from the period shows

that he had 633 riksdaler in credit from 45 different persons in Lurøy, Nesna and Træna. The country police was reading it at the church of Lurøy March15. 1698. In this period the price of a cow was about 3-4 riksdaler.
READ MORE ABOUT ARNT OLSEN STORCH HERE.

The life of his son, Ole Arntsen Storch was more heated. He was more of a wild chap in his youth. A quarrel with the priest, Nils Todal, ended in court.

In 1720 he wasn’t able to pay taxes. For a period he was sheriff in Rødøy, Lurøy and Meløy. He have a lot of descendants.
READ MORE ABOUT THE COURT CASE AGAINST OLE ARNTSEN STORCH HERE

Norum
About 1550 there is notes about the farm Norum at Inderøya, Trøndelag. The name has probably been used much earlier. Nor-north, um-home.
This surname is used all over the country, specially in Oslo and the region around, but as fare as we know there is no connection between these people and the farm in Trøndelag, or the Norum Family at Helgeland.

Soop
The Soop Family is mentioned by Absalon Pedersøn in ”Norges Beskrivelse” (Description of Norway) as an old family in Sogn. The first mentioned is Anfinn, born about 1420. His great great grandchild, Anfinn Anderssøn Soop at Underdal is in1522 mentioned as the man that is paying most taxes in Sogn. He have a lot of farms both in Sogn and in Hallingdal.
Their Cost of Arm was three flowers in a vase.